SLOGAN 44  •  Train in the three difficulties.
Mind training or lojong is a way to uncover and develop confidence in our own inherent goodness and that of all beings. It is a way to cultivate loving-kindness. You might say that is the good news. But the way to go about that is by going directly to the dark side, to what prevents that awakened quality from manifesting, which is not an easy task. You might say that is the bad news.

This slogan is about facing difficulties. It is nice to bask in little moments of inspiration or calmness, or altruism. It is inspiring and gives us hope. But it is hard to stay with our obstacles, blockages, and neuroses long enough to figure out how to deal with them. It is too embarrassing and disheartening, so we bounce away, pretending it isn’t so, or hoping for the best.

The first difficulty that obstacles arise too quickly for us to catch. It is hard to slow down enough to recognize the first instant when a neurotic thought or emotion arises. There are, of course endless varieties, but the traditional list of such upsetting emotions, or kleshas, includes passion, aggression, ignorance, jealousy, and pride. Usually, by the time we recognize that we have been captured by confused emotionalism, it is too late: we are already overwhelmed. So the first training is to try to be a little quicker on the draw, and to recognize them as soon as they arise.

The second difficulty is that once these difficulties have moved in on us, it is very hard to know what to do about it. Kleshas are very difficult to overcome. So the second training is undermine them at their root, which is our fixation on ourself. It is to learn to overcome them once they appear.

The third difficulty is that the kleshas keep coming back: it is hard to cut through them. So the third training is to stop buying into the kleshas, being attached to them, and inviting them back.

Instead of battling big deal emotional hang-ups, practice paying attention to the tiny little shifts of thought that, like a match to a fuse, cause a big explosion of confusion. 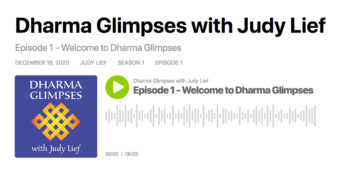