Please explore the resources below re: Judy Lief’s teachings on End of Life, including her book, an audio excerpt, video, Lion’s Roar article, and two interviews. 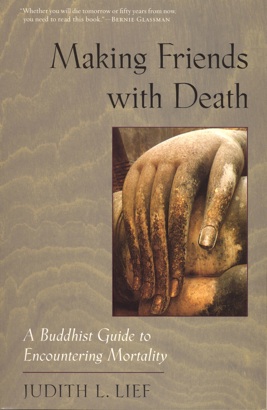 Facing Mortality and Caring for the Dying

Judy is the author of Making Friends with Death: A Buddhist Guide to Encountering Mortality (Shambhala Publications, March 2001). She has been presenting classes and workshops on a contemplative approach to death and dying, and on the teachings of The Tibetan Book of the Dead, since 1976. Judy collaborated with Florence Wald, a founding mother of the Hospice Movement in the United States and former head of the Yale School of Nursing, on several conferences, workshops, and dialogues examining the role of spirituality in the care of the sick and dying.

Ms. Lief was a keynote speaker at the 10th International Palliative Care Conference, held in Montreal in 1994 and at other international conferences. In 2000–2001 Ms Lief served as pastoral counselor for the Maitri Day Health Center in Yonkers, NY (an adult day health center for people with AIDS). While in Vermont, she served for many years on the Madison-Deane Initiative, which produced the award-winning documentary, Pioneers of Hospice, and had the mission of changing the face of dying through education and advocacy. Judy also served on the board and was a member of the faculty of the Clinical Pastoral Education program at the Fletcher Allen Hospital in Burlington, Vermont. In recent years Judy has been a keynote presenter at Contemplative Care of the Dying Symposiums held at the Garrison Institute and sponsored by the Zen Center for Contemplative Care. She has led workshops and given presentations at several Naropa University conferences on Compassion and Healing.

The Buddha said the greatest of all teachings is impermanence. Its final expression is death. Buddhist teacher Judy Lief explains why our awareness of death is the secret of life. It’s the ultimate twist.

Whether we fight it, deny it, or accept it, we all have a relationship with death. Some people have few encounters with death as they are growing up, and it becomes personal for them only as they age and funerals begin to outnumber weddings. [Read more…]